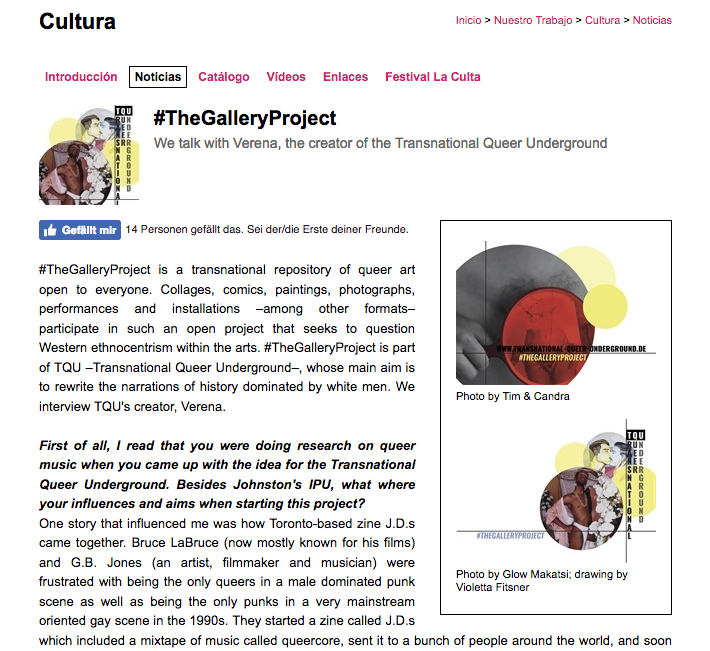 We talk with Verena, the creator of Transnational Queer Underground

“#TheGalleryProject is a transnational repository of queer art open to everyone. Collages, comics, paintings, photographs, performances and installations –among other formats– participate in such an open project that seeks to question Western ethnocentrism within the arts. #TheGalleryProject is part of TQU –Transnational Queer Underground–, whose main aim is to rewrite the narrations of history dominated by white men. We interview TQU’s creator, Verena.

First of all, I read that you were doing research on queer music when you came up with the idea for the Transnational Queer Underground. Besides Johnston’s IPU, what where your influences and aims when starting this project?
One story that influenced me was how Toronto-based zine J.D.s came together. Bruce LaBruce (now mostly known for his films) and G.B. Jones (an artist, filmmaker and musician) were frustrated with being the only queers in a male dominated punk scene as well as being the only punks in a very mainstream oriented gay scene in the 1990s. They started a zine called J.D.s which included a mixtape of music called queercore, sent it to a bunch of people around the world, and soon enough everybody thought queercore was actually a thing and queer punk scenes began to emerge all around Northern America and Europe. Hearing that encouraged me to never dream too small and made me realize that it’s up to me (and you) to make the change that we want to see in the world.”